29. Does someone in your household pay any of the following utility bills? 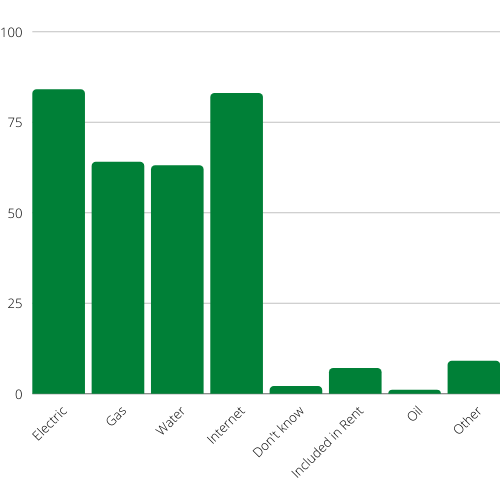 This image is a snapshot of responses to Q.29 which asks "Does someone in your household pay any of the following utility bills?" Responses were manually entered by survey administrators. The options available were "Electric, Gas, Oil, Internet, Water, All are included in rent, or other."  The most common bills people pay are electric, with 84 people reporting to pay an electric bill. The second most common was internet, with 83 people reporting having someone pay it. Gas and water had 64 and 63 respondents respectively. 2 reported not knowing, 7 said it is included in rent, 1 reported paying for oil, and 9 mentioned other bills such as phone or trash bills.

In this question, the research group found there to be a miscommunication between the survey administrators and the respondents. It would be interesting to see whether bills are included in rent and whether some people included the bills in the rent. One interesting aspect of the answers analyzed is with the fact more respondents paid for electricity than gas and water. The foregoing is related to the spatiality of the survey sample, where the majority living in the Philadelphia and Pennsylvania region are more likely to have gas and water included in rent and have to pay for electricity on their own. The greatest energy illiteracy is with regards to the water bill. What was also interesting was a respondent who considered the trash bill a utility, which bring forth questions on what should be defined a utility.