Energy poverty. Energy vulnerability. Energy insecurity. All are terms that describe, in various ways, insufficient energy to meet household needs. In the 1970s, for example, fuel poverty was used to describe a household’s inability to heat the home during winter months, a widespread problem in the U.K. at the time. In India, energy poverty points to the lack of regional infrastructure that would deliver energy services in homes. Energy vulnerability, by contrast, describes the ongoing potential for loss of services and the precarity produced when households live on the edge. Energy insecurity has been used in multiple ways -- sometimes directed at national or regional scale -- to describe particular kinds of vulnerability with political implications. Despite extensive empirical documentation and theoretical development from scholarship in Europe, Africa, and India, little research has been conducted on the intricacies of energy vulnerability in U.S. contexts.

The Energy Rights Project was designed to investigate the unique conditions of energy vulnerability in the U.S. Midatlantic region to advance conceptualization of energy vulnerability relative to local infrastructure and organization. In this region, annual moratoriums prevent shutoffs for limited-income households during winter months but not during summer heat waves; large cities including Philadelphia, Baltimore, and Wilmington suffer from an affordable housing crisis; and the state of Pennsylvania, with its abundant reservoirs of natural gas, has grown a staunch resistance to renewable energy. The MidAtlantic is also home to long-standing and innovative energy assistance networks, where models to address energy vulnerability incorporate broader, multi-scale efforts to combat poverty.

In this work, we are tracking the relationship between vulnerability and resistance; what it means to say that a household or a community is energy vulnerability, and how attendant precarity is resisted through various forms of political, embodied performance.

“Our aim is to expand our political vocabulary to meet the challenge to think about modes of vulnerability that inform modes of resistance, and to “resist” those frameworks that seek to underplay or refuse forms of political agency developed under conditions of duress, without presuming, as some accounts of resilience tend to do, that they always prove effective.”  (Butler, Gambetti, Sabsay 2016, 6)

Image: This photograph by Daniel Arauz was taken in November 2013 “Resistance Festival” held at “The Bulb” in the San Francisco Bay area. The festival opposed the City of Albany’s proposed eviction of a homeless encampment.  The photograph captures the Beseeching Woman at sunset, a creation of Osha Neumann; unlike other images of compact prayer, the Bulb’s Beseeching Woman reaches out and up, arms wide, leaning into her ask. "2013/11/29 Albany Bulb - A Festival of Resistance" by Daniel Arauz is licensed under CC BY-SA 2.0 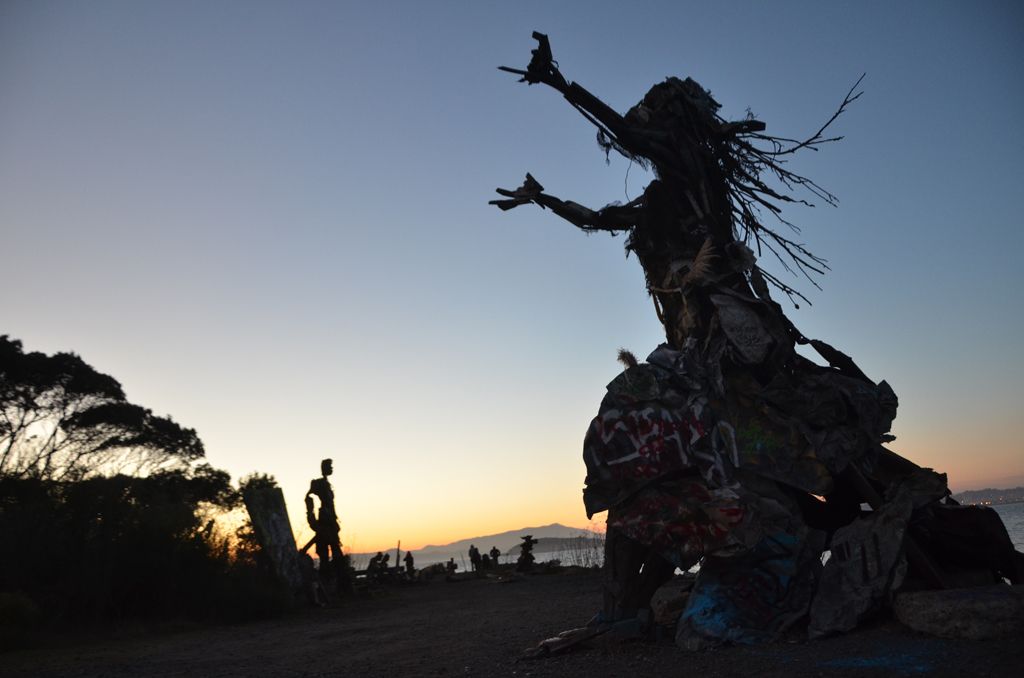